Insanity is an FNaF (Five Nights at Freddy's) fangame, created by Blackout and other developers.

Recently, a new 'Freddy Fazbear's Pizza' has opened, featuring extremely kid-friendly animatronics that the kids instantly grew attached to. It is a fun place for everyone. However, that fun-friendly theme is just a curtain.

And behind that curtain lies the Parts and Service room.

Insanity is a FNaF Fangame that goes all the way back to FNaF 2 and explores something that Scott mentioned, but never actually solved in the series. It will feature a small cast of antagonist characters, which allows the game to create kind of a personality for every single one of them. The game is going to be one of the scariest Fangames, since the game will have an extremely creepy ambiance and moments in the game that could possibly make you a little swetty. This game will be a horror game in many ways and not only use Jumpscares to be scary.

The player starts off in an Office, which with them, they have a Monitor to access the cameras, but can only be used for a limited time as it has a Battery meter, and can only be recharged if the player isn't using the monitor.

Whenever an Insane animatronic is sighted, the player would pull up their monitor to avoid getting killed by them.

The Fan can be used as a mechanic, as if Insane SpringBonnie is sighted, the player would turn off the Fan to avoid getting killed, however, repeatedly turning the fan off and on can cause a jumpscare by a Yellow Bear which would be spotted in the hallway. 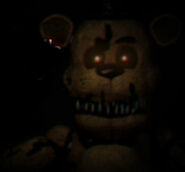 New Gamejolt page header.
Add a photo to this gallery 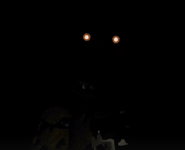 Insane Springbonnie in Insanity Teaser Trailer
Add a photo to this gallery
Retrieved from "https://insanity-series.fandom.com/wiki/Insanity?oldid=541"
Community content is available under CC-BY-SA unless otherwise noted.